MILWAUKEE, Nov. 8, 2018 /PRNewswire/ — In 1924 Babe Ruth hit his first home run of the season off a pitch thrown by Hall of Fame pitcher Walter Johnson.  That Home Run Bat was signed at the end of the game and presented to high school senior Phil Grossman. 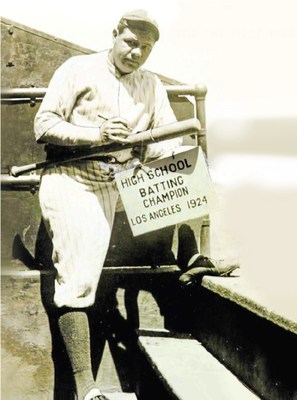 Grossman was the winner of a highly publicized year-long batting contest sponsored by the LA Herald.  The winner received the exact bat used by “The Babe” to hit the first home run of the 1924 season.

There are dozens of pictures and articles in a scrapbook assembled by recipient Grossman.  This priceless scrapbook is included with the bat at auction.

Grossman treasured the Babe Ruth Bat until his death in 1986. The bat then became the property of Grossman’s nephew, Mike Robinson.  Sadly, Robinson had the bat and scrapbook stolen in 1989 but after a 29-year search, the bat was recently located and returned to Robinson.

The importance of both Babe Ruth and Walter Johnson to baseball cannot be overstated.  Both men were among the first six baseball players to be inducted into the Baseball Hall of Fame.

This bat is not only the most chronicled piece of sports memorabilia of all time, it also has the verification of the industry’s top experts, receiving a GU10, the highest rating possible.

Although the reserve/opening bid for this bat is $3,000,000, collectors are already speculating that this Babe Ruth 1924 Home Run Bat will sell for more than the 1920 Babe Ruth jersey, making it the most valuable piece of sports memorabilia of all time.

For information about this bat and auction, please go to: www.1924baberuthbat.com