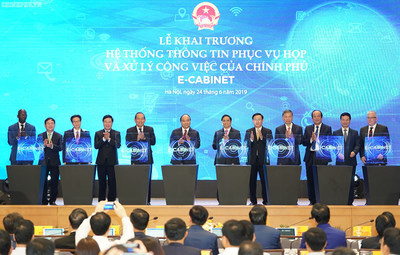 Dubbed “e-Cabinet”, Viettel tailor-made the system based on the operations and characteristics of the Vietnamese government. The system promises the elimination of the use of paper by securely updating, storing, and managing documents for government meetings while offering electronic voting with digital signatures. It also automatically sends notifications and reminders to officials.

Viettel says the system is expected to help reducing meeting times by 30 percent and completely remove the use of paper at government meetings by the end of the year, except for confidential documents.

e-Cabinet was first put into operation during a government meeting hosted by Vietnamese Prime Minister, Nguyen Xuan Phuc in Hanoi, last month. During the meeting, an online vote was held using the new system. Twenty-seven cabinet members voted on a decree on electronic identification using electronic tablets. This includes four who were not physically present in the meeting room.

Minister-Chairman of the Government Office, Mai Tien, said the system could also eliminate petty corruption since all information is recorded digitally. This will help removing hurdles for businesses and startups, and in return, boost the economy.

Viettel’s new product comes as the concept of “smart cities” gains momentum around the world.  According to research firm, Deloitte, this concept has been influencing governments around the world, with authorities looking to use the Internet of Things technology to find new value for citizens, enhance capabilities, and streamline processes. [1]

According to the telecommunications giant, e-Cabinet is just the first step in turning Vietnam into a “smart” country.

Viettel Group is the largest telecommunications group in Vietnam with 76 million customers. The group has more than 20 subsidiary companies operating in different businesses including telecom, investment, real estates, foreign trade and technical services. In 2014, Viettel obtained US$9.8 billion revenue and US$2 billion profit, ranking among the top largest enterprises in the country in terms of revenue. Viettel Global is also one of the biggest Vietnamese overseas investors. It is currently operating 9 telecommunications companies in 9 countries across Asia, Africa and Asia with 13 million customers.